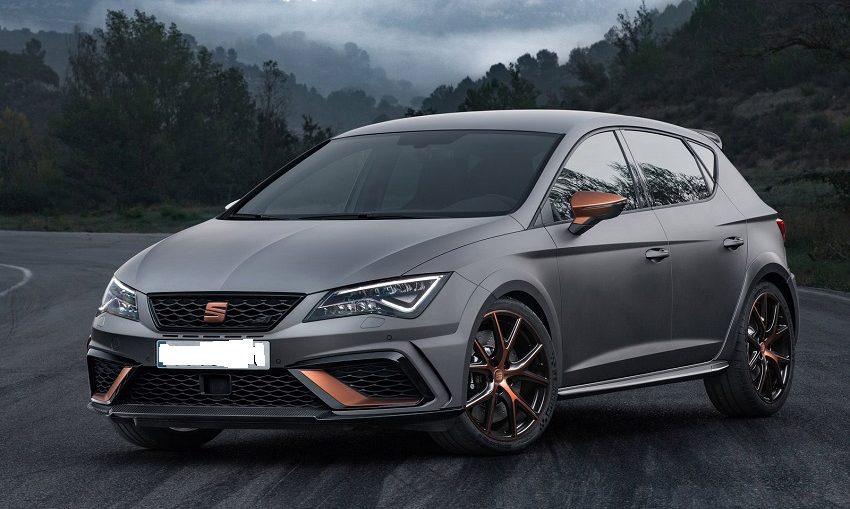 The Spanish brand is one of the icons of our country. She was responsible for the motorization of our society, she has managed to overcome countless situations that made her doubt her future. And, above all, she has managed to enter our memories with a special affection. Who is not able to associate some sweet moment of his life with a SEAT model? We analyze what we understand to be the Best SEATs in the history. 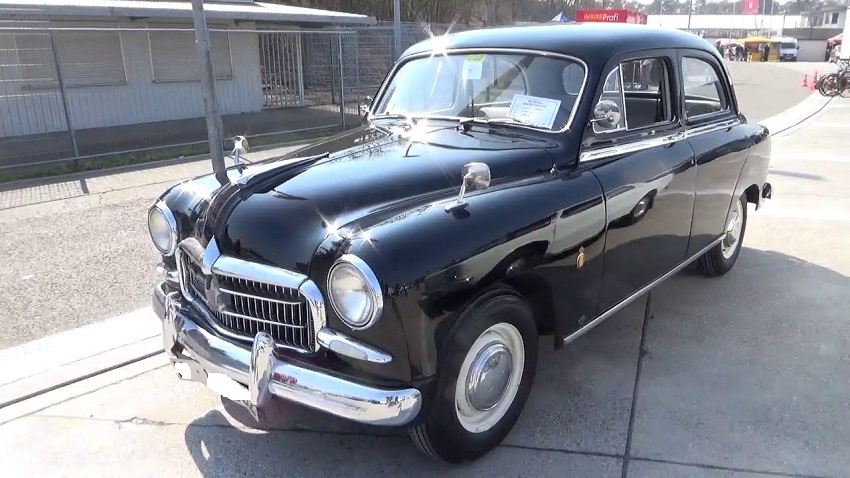 This is how the history of the brand that was born to motorize the Spanish population began. Although, seeing the trends that emerged in the rest of the countries around us. This was not the most appropriate formula. It was a medium-large vehicle (for the time), while the others had opted for small-sized models. Although it was necessary to modernize a country in a better way than with a novel model of Fiat origin, very advanced in technology and that was one of the first to use a self-supporting body.

The fault of which you have seen bodies of this vehicle in the form of van, ambulance or fireman’s vehicle is due to the Armengol trainer, who even produced numerous different models. The department of SEAT Historic Cars boasts having one in perfect condition. It is one of the best SEATs in history. 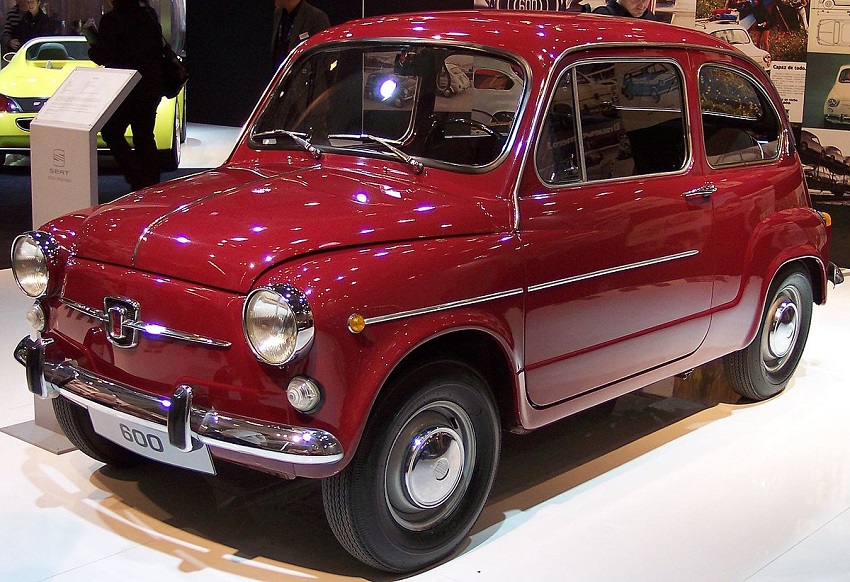 The modern history of our country could not be understood if this car had a thousand and one nicknames. It helped to give the impulse that our society needed to advance at the rate that the rest of the European countries were doing. The SEAT 600 was the Spanish conversion of a homonymous model that Fiat had launched months earlier in Italy, although, history dictates that there was no successor collective affection that achieved here by the closeness in size with the remembered 500 or Topolino.

There were several attempts to replace it, the first with the arrival of the most modern SEAT 850, although its price and high demand made the brand desist from its claims and keep it in the dealerships. The story tells that you had to wait for years until you received it and that you could not choose the color, that you had to accept it as it came. 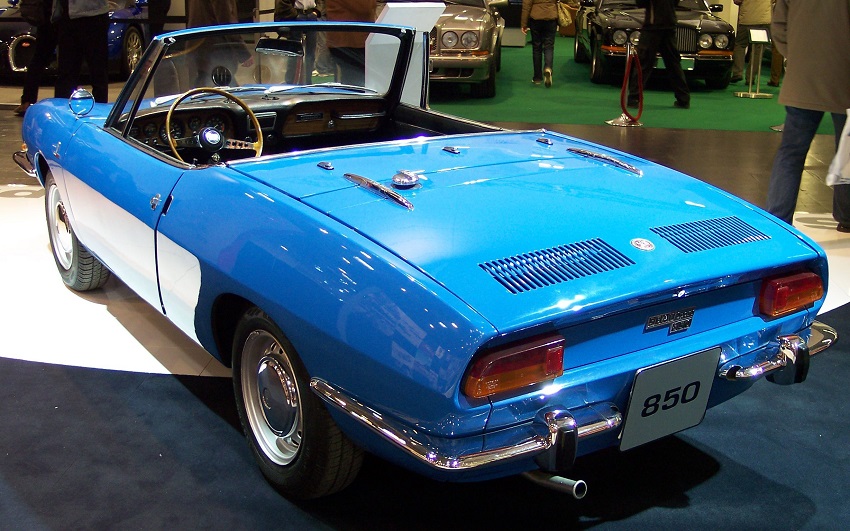 The Fiat 850 Sports figure had been delighting Italian drivers for two years before, in 1967, the SEAT 850 Sport landed on our market. And, as seen, there was a great expectation because it did so because it was put on sale there was an avalanche of requests that far surpassed the production capacity of the plant in Barcelona. This was in charge of demonstrating to the Spanish population that the brand was also interested in sporty and cheerful bodies, and it was a great precedent for two years later, the convertible variant arrived … although its transformation had much more substance. It is one of the best SEATs in history.

One of the details of this model is that it was never known as SEAT 850 Spider, its official name was simply SEAT 850 Sport and that when the body version had changed its name to SEAT 850 Sports Coup. His bodywork was signed by the prestigious Italian designer Bertone and when he lost the hood his physiognomy varied with a slight widening of the tracks and the conversion into a two-seater.

The convertible arrived with a length of 3.82 meters and a height of 1.22 meters. It used a 903 cm3 engine that delivered a power of 52 hp that could already be seen in the Sports Coup and that launched this small sports car up to 150 km / h. The vehicle was offered convertible with a choice of hard top or hard top that was paid separately. 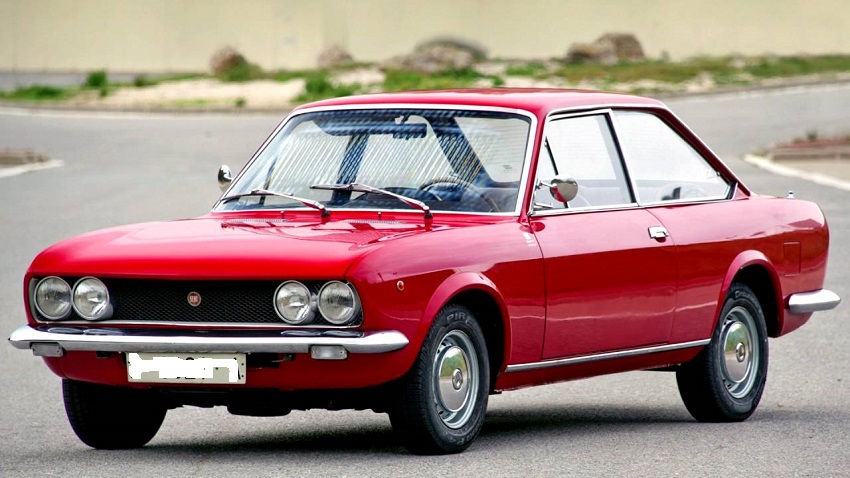 A model that surprised many when it arrived. It was presented with a profile of just over 4 meters in a market in which there were already several medium-sized saloons, and with a sporty attitude with its 110 HP when contemporary family vehicles barely yielded between 50 and 75 HP. But this sedan had a trick, in reality, it was 2 + 2 where the rear seats were relatively comfortable.

It was launched in April 1970 and its production ceased in 1975. It was manufactured with a single body of 3 volumes and configuration of 2 + 2 seats. Its price reached 299,000 pesetas (1,797.03 euros) when the per capita income of the time was 84,690 pesetas (509 euros). Seen with perspective, it cost more than a floor then. It was launched with a first version 1600 although in 1972 came an evolution that was called 1800 with remarkable mechanical and aesthetic changes. It is one of the best SEATs in history.

But it was not just a sports car for the whole family, it was also a very luxurious vehicle, very well equipped that even offered the option of air conditioning. Its finishes were first class and one of the few buts was in the access to the rear seats, which required a certain agility and contortion. However, on the road, it stood out for its capacity and performance. 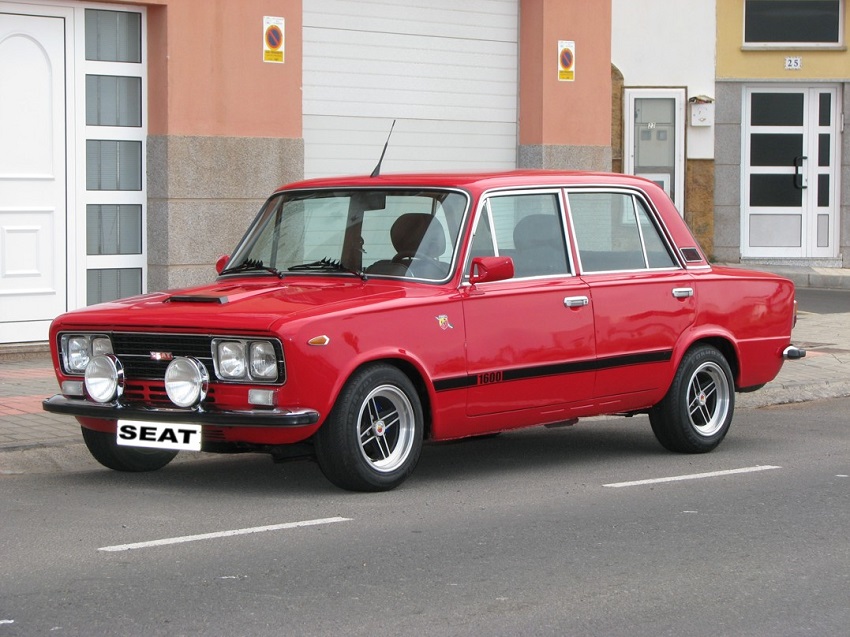 Although the genealogy indicates that the original model was the SEAT 1430, we get exquisite and we look at one of its most incombustible versions, the most sporting one that had the FU last name, although, to be faithful to the history of the Spanish firm there was two, one baptized as 1600 (1973-1975) and another 1800 (1975-1976).

The first, the SEAT 1430 Special 1600 FU 0, although that name remained in “FU zero” for friends. It had a 1,600 cm3 engine with the double overhead camshaft, a mechanic that received the 124 Sports Coup and, in this case, responded with 95 HP. One of the secrets of his success was precisely in the comparison with the model with which he shared mechanics. It was more economical, it was not so extreme and it was less flashy. It is one of the best SEATs in history. 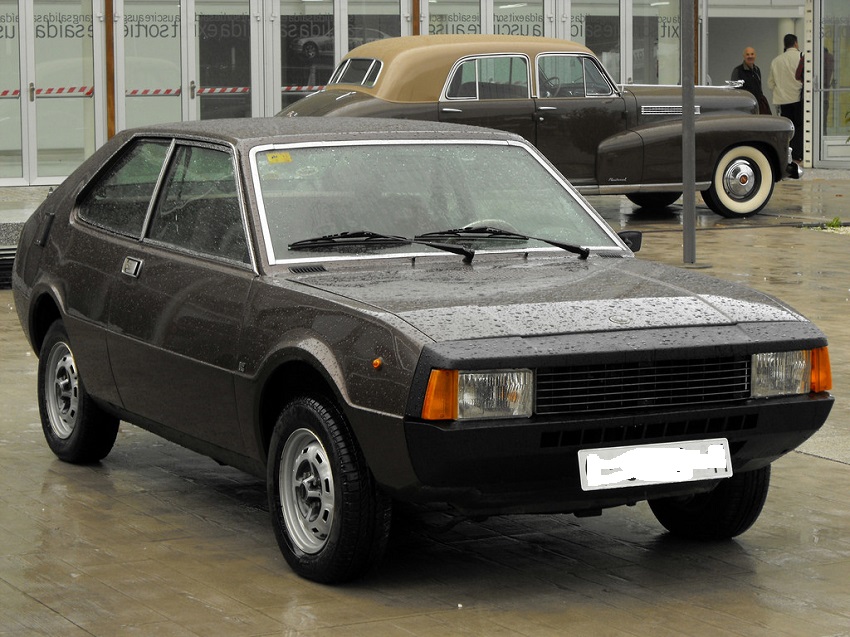 Curious the history of also known as Bocanegra. It is said that it was the first sport created in Spain since the time of Pegasus, although the reality is that it was the adaptation of an NSU design, which was left with several projects in the air once it was integrated into Audi. The mechanics and chassis of Fiat were used and its image came from the imagination of designers and molders of Barcelona.

His design was very popular since his presentation. A front (and a back) made of polyurethane made him the nickname of Bocanegra. In addition, it had numerous innovations for the brand, such as the one-piece dashboard and details that pleased the 2 + 2 seating configuration. It was launched in 1976 with a price of 270,000 pesetas (1,622.73 euros). It is one of the best SEATs in history. 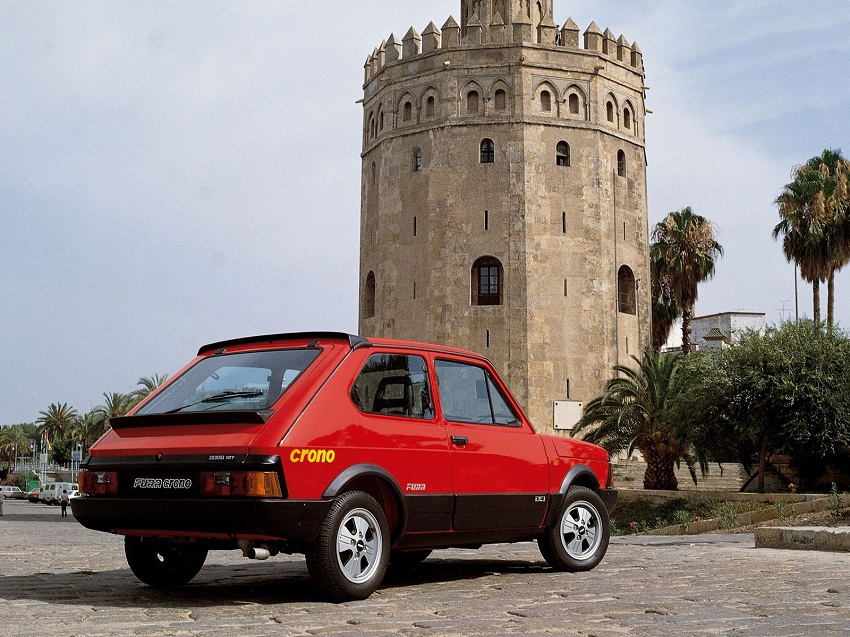 The SEAT 127 settled successfully in our market, but the world demanded more spicy so the Spanish brand responded with an evolution that was first called 127 Fura and later Fura to dry. Of course, requests for even more mordant from the buyers led to a new evolution called SEAT Fura Crono.

The SEAT Fura was launched in 1980 with a price of 84,997 pesetas (2,049 euros). And a total of 84,997 units were produced. Such was the notoriety achieved by the SEAT Fura Crono that his life did not end with the disappearance of 127. And the subsequent cessation of sales in Spain. He had a new life in Egypt, where his pieces were sent from Barcelona from 1968 to assembled under the CKD regime. It is one of the best SEATs in history.

Seen with the eyes of today, it is possible to think that it was very little sport for the beginnings of the decade of the 80. It will be thought when it is known that its engine was of 1,4 liters it gave 75 CV. But this set was based on a vehicle that barely reached 760 kg and he was very nervous in his behavior. 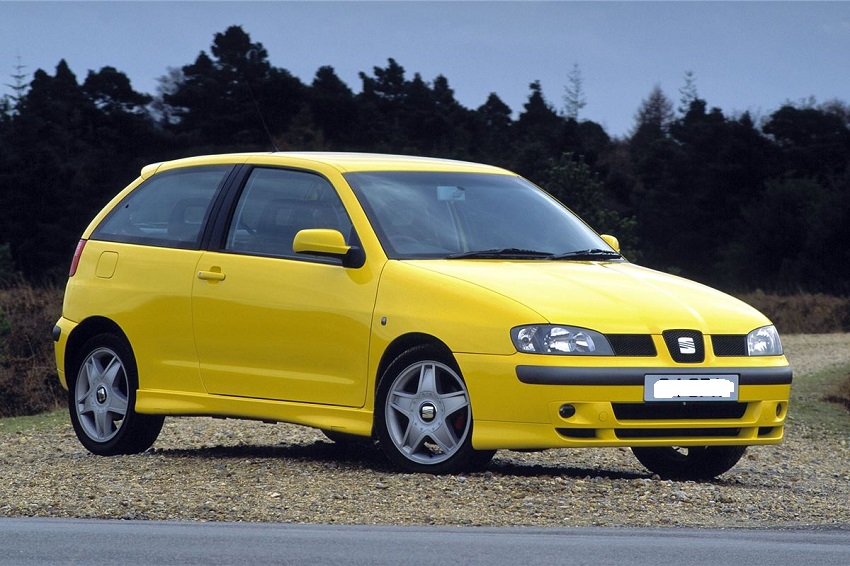 The path was already started and in what way. This model sought to honor the successes that the Spanish firm had achieved in the World Rally with the Ibiza Kit Car where it achieved two world titles. It benefited from the bottom of the engine cabinet that had the Volkswagen Group. And so came the engines of 4 valves per cylinder. And even 5, like the 1.8T 20 valve engine that squeezed its power to 156 HP. It is one of the classic cars of the 90s.

Variety is the taste, so began to appear the first variants that raised its power and radicality. This could boost the SEAT Ibiza II Cupra R, which boasted of a 180 hp engine prepared by SEAT Sport. The competition division of the Spanish firm.

The second generation of the SEAT Ibiza was launched in March 1993, although it took more than 3 years to get to know the Cupra variant. It appeared at the end of 1996 with a two-liter and 150 HP engine that launched it up to 216 km / h, although the Cupra R variant reached 200 km / h.

The second generation of the SEAT Ibiza was launched in March 1993. Although it took more than 3 years to get to know the Cupra variant. It appeared at the end of 1996 with a two-liter and 150 HP engine that launched it up to 216 km / h, although the Cupra R variant reached 200 km / h. It is one of the best SEATs in history. 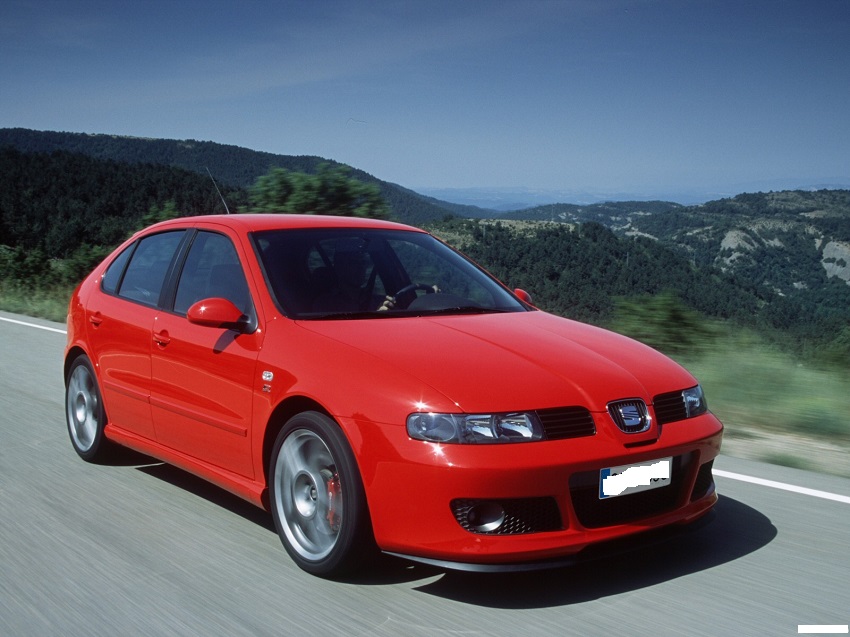 If the Cupra versions had been liked in Ibiza and Cordoba, the new compact era could not be left behind. The Lion was a model that surprised from its launching to print claw in his style. Although what he had prepared for the future Cupra was going to leave ojipltico to more than one.

The Len I Cupra 4 was introduced in January 2001 with an atmospheric 2.8-liter engine with a V6 structure. A power of 204 hp and total traction. That can be called radicality. He had the speedometer needle up to 235 km / h. 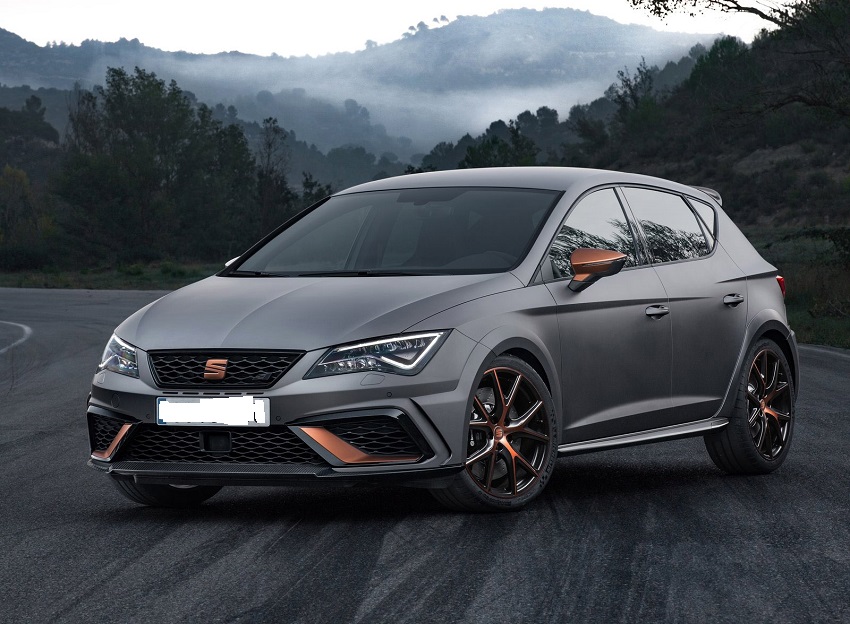 The last to arrive and the most radical in its bet. The Cupra denomination came to the restyling of the third generation of the Leon with 290 HP. Later appeared the Cupra 300 version that raised its power to 300 HP. And finally came this Cupra R with 310 hp and war paintings very avant-garde, in matte black and gold details.

This is a special version limited to only 799 units and has been the way in which SEAT has dismissed the third generation of the Lion before the arrival of the fourth. And he says goodbye in style, improving his suspension, acceleration, and behavior of the gearbox. The commemorative edition had a five-door body, although a family member was later launched, called Cupra R ST, without limited production and without the bronze details that made it recognizable. It is one of the best SEATs in history.

Only 40 arrived in our country, which shows the interest that this model has generated. His 310 CV achieved an acceleration in the 0 to 100 km / h in 5.7 seconds. And the maximum stood at 270 km / h, thus ranking as the fastest street SEAT ever built.

Those are the best SEATs in history.