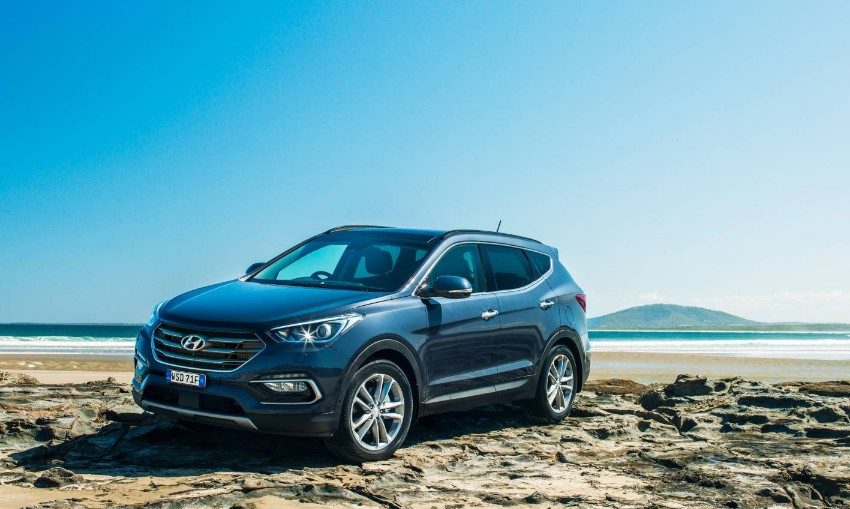 In this guide, you will find the 10 best 7-seater car on the market, both in SUV format and in the MPV format, a selection made with strictly editorial criteria and without the intervention of brands. Our team of editors punctuates all the cars on the market and from them we have extracted the 7 squares that seem to us more complete and more rounded for a large family that aspires to fill at least from time to time those 7 places.

If you are interested in the 7-seater car but do not want to limit yourself to our selection of the best, you can consult our complete guide with all 7-seater car on the market. In it, you will find all those who are in this same guide along with all their rivals of all categories. 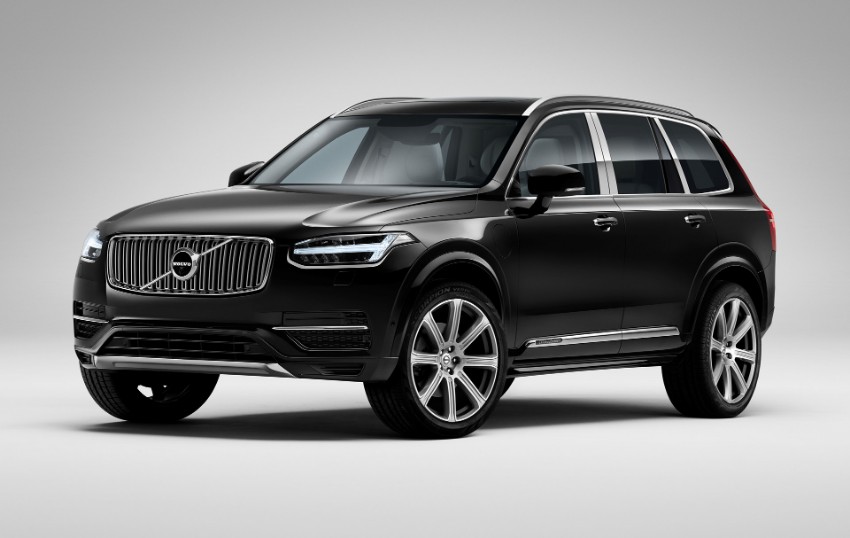 The Volvo XC90 is a large SUV with seven real seats for adults. It is on sale since 2015. It stands out for its very efficient engines and the safety equipment it incorporates.

The Volvo XC90 is one of those cars that clearly stand out among the best 7-seater models on the market. It has 7 comfortable seats that can transport without problem to 7 adults, leaving still a fairly usable trunk (although not for the full luggage of so many people).

The Volvo XC90 is not only a very large 7 seats, but it is also a luxury vehicle in which to travel in an exquisite environment of comfort and design, powered by 4-cylinder engines and high efficiency. Its exterior design is at once powerful, exclusive and discreet, while its interior is an authentic lounge of luxury rolling.

The careful design and finishing of the interior and the care with which all the surfaces that can be seen and touched have been treated. Leather, wood, aluminum and very little plastic are what we will have around, especially if we opt for the leather-trimmed dashboard. The attention to detail is not limited to the most obvious, but also extends to the interface of the vertical touch screen, with menus, typographies, and colors to match the rest of the car.

The basic does not reach 200 hp but has enough thrust due to the fact that the car is relatively light. The top of the range is the XC90 T8 Twin Engine, a plug-in hybrid version of 400 hp with minimum consumption and infarction performance. Of course, the price is also up to it. 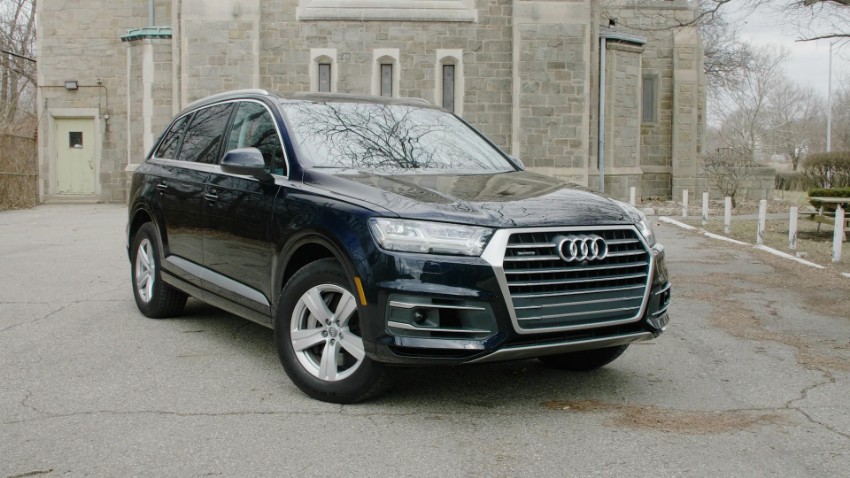 One of the most luxurious SUVs on the market, it can have a lot of equipment and a high-performance diesel engine. It is also interesting to have up to seven seats, a detail that users have always valued positively

It is inevitable that luxury cars end up scoring higher on our list, as is the case of the Audi Q7. We can consider it as the main rival of the Volvo XC90 both in technology and space and interior quality. The difference between the two is minimal.

The best of the Audi Q7, aside from its 7 comfortable seats, is the quality and design of its interior, with that aesthetic of minimalist luxury that characterizes the latest Audi and that we liked so much in its latest products.

As a point against it can be said that the exterior design of the Q7 seems to have a major problem of proportions because after the time it has been on the market is still quite strange from certain angles and is not something that is corrected by changing the color or tires. For the rest, the Q7 engines have a wide range of powers and fuels (gasoline, diesel, hybrid Q7 e-Tron PHEV ) that can satisfy the most demanding with the latest technology. 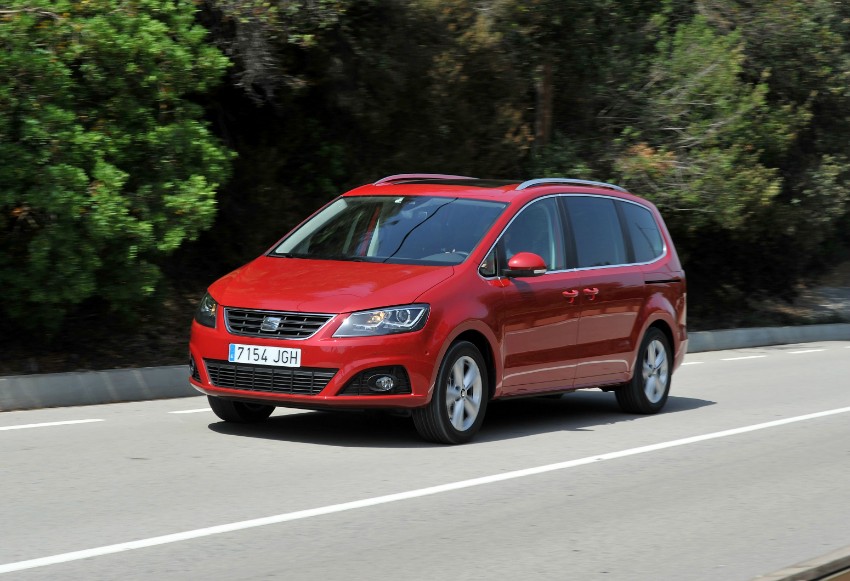 The SEAT Alhambra is a large seven-seater car minivan with a large boot and sliding rear doors.

In this section, we can also include the Volkswagen Sharan, twin brother of absolute resemblance to the SEAT Alhambra. Both are the same car under a different brand but, being so, it seems more logical to stay with the SEAT for being a bit cheaper with equal equipment and engine.

The Alhambra has 7 large spaces that leave a small trunk after the last almost testimonial row and make it a means of transporting passengers or goods, but not both at once.

Even so, within the segment of the large monovolumes, both the SEAT and the Volkswagen stand out for their good interior quality, a very high ride comfort, and a much more pleasant driving feel than their exterior appearance could suggest. 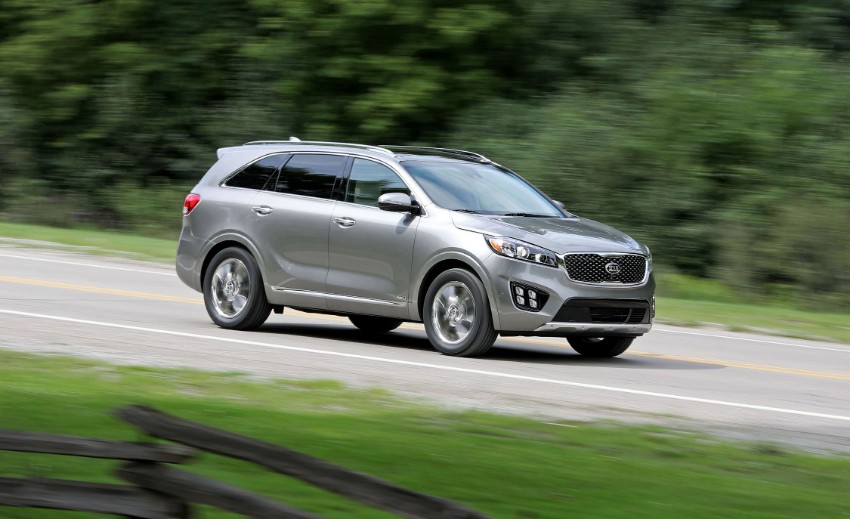 The KIA Sorento is a large SUV, with a versatile cabin of 5 + 2 seats in which the 5 rear seats can be hidden one by one to form a huge cargo surface.

The Kia Sorento is one of those Korean cars that go unnoticed in the market, but if you’re going to see it suddenly you’re no longer worth anything else.

We are convinced by its remarkable level of interior qualities, its space. Its design in general, its level of equipment and safety and its good behavior on the road. They play against it a very limited offer of engines and maybe a somewhat conservative design inside and out.

The Sorento, the older brother of Kia Sportage, enjoys a much lower sales level. But far exceeds the constructive quality of its great enemy the Nissan X-Trail. 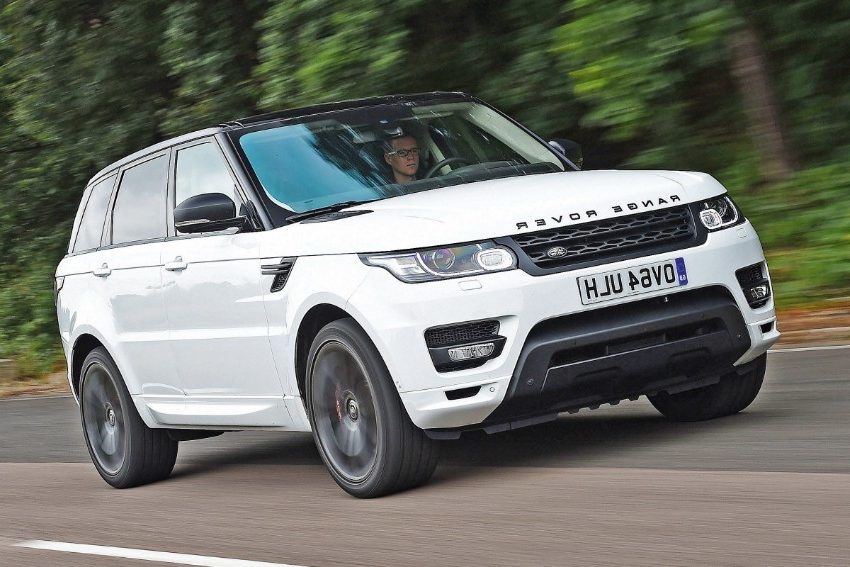 Few people know that the Range Rover Sport has the option of adding two extra seats in the trunk, perhaps because it has not been promoted as much as in the Q7 or the XC90. It is an option that does not count the Range Rover, his older brother, despite sharing platform and interiors.

The interior design of the Range Rover is superb and gets like the third in discord when it comes to contesting the best habitat on the planet.

With respect to its rivals, this 7-seater car has the clear advantage of having a behavior outside the asphalt really bestial. The Range Rover is capable of reaching where others probably would not arrive with features as exotic as a wading height of 90 cm. In addition to the most modern and sophisticated systems of traction control, reduction, differential lock and height adjustment ground.

This impressive vehicle has as counterpart software that is behind the competition in the infotainment section. But otherwise is a very interesting option.

The Citron Grand C4 SpaceTourer is a medium-sized MPV with 5 seats plus two for children, for 1,500 more than the 5 seats. If you hesitate to use the two extra seats, better stay with the short C4 Spacetourer.

The Citron Grand C4 Spacetourer is one of the largest proposals per euro invested in the market. It sneaks into our selection of the best 7-seater car precisely because it offers a huge space at really affordable prices for a car of this size.

Built on Citron’s EMP2 platform, the Gran C4 Spacetourer is spacious, light and economical. Giving the best of itself in the HDI diesel versions but without falling behind in the performance of gasoline engines.

The 7 seater car is comfortable, although the last two are rather emergency. And walk a little foot space if we intend to put two adults there, a couple of children will traveeaseee. The equipment levels are high and the giant full-color central screen will convince the most technophiles. 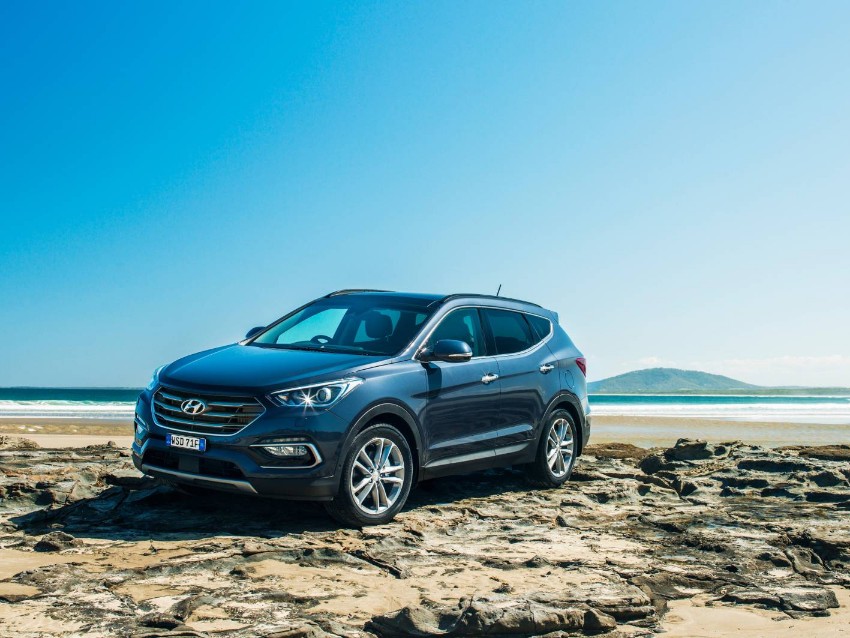 The Hyundai Santa Fe is a large SUV that has 7 seater car. And a 5-year warranty with no mileage limit.

The Hyundai Santa Fe is a 7 seater with a high level of style, a complete equipment. An interior quality of remarkable high and a frankly competitive price. It becomes a very interesting alternative for a customer who would like to have a Q7 but has half the budget. Since the car will perform the same functions and give the same satisfaction except for the supposed prestige of the brand and that latest technology tip.

The brand offers 5 years of series warranty, well above the market average without paying a plus. And has nothing to envy the best European or Japanese brands.

It is interesting to also point out as an option very much to consider the Kia Sorento. Cousin-brother of the Hyundai Grand Santa Fe that also has 7 seater car. A level of similar finishes and a price of the most competitive. In addition, the Sorento has a 7-year warranty (with a limit of kilometers in this case). Something totally unusual in the market and that makes it a car to buy very quietly. 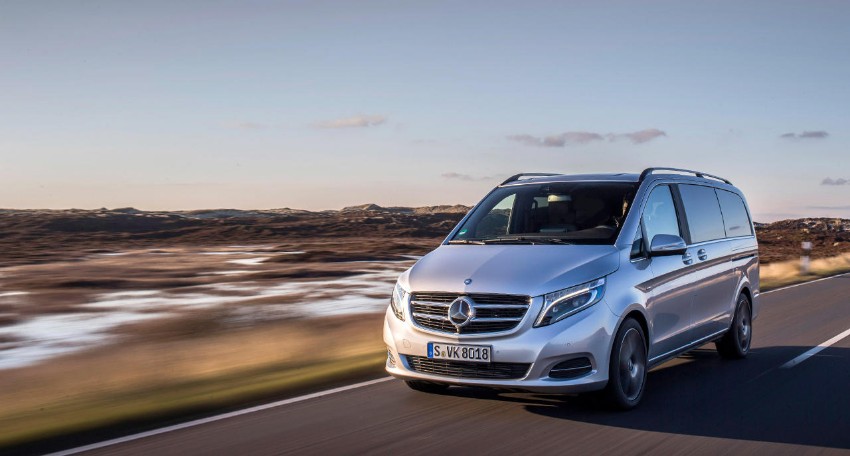 Huge on the inside, it stands out for its many possibilities of equipment. And the variety of bodies and levels of finish. It is manufactured in Spain for the main international markets

The Mercedes V-Class is an industrial van converted into a luxury bus. Which gains its presence in this list by being the most spacious vehicle in the entire category. And capable of accommodating up to 8 occupants, in the absence of 7, with all the necessary luggage to make a powerful trip.

Its boot opens practically from the height of the knees to beyond our head and is divided into two levels. They fit suitcases until they get bored.

Its interior is perfectly topped with first class materials. And its ride comfort is at the height of the best MPV. The dashboard is nice and designed with the same style as its brand brothers, but maintains an analog box. Even the driving feel is quite acceptable, with a very vertical steering wheel. And large car reactions, but not a truck.

Its clear point against is precisely its best virtue too: it is an industrial vehicle. Which we will remember when going up when going down when parking or maneuvering such a bus. And even with the van echoes that occur inside it when it goes empty. Such is the size of the passenger compartment. 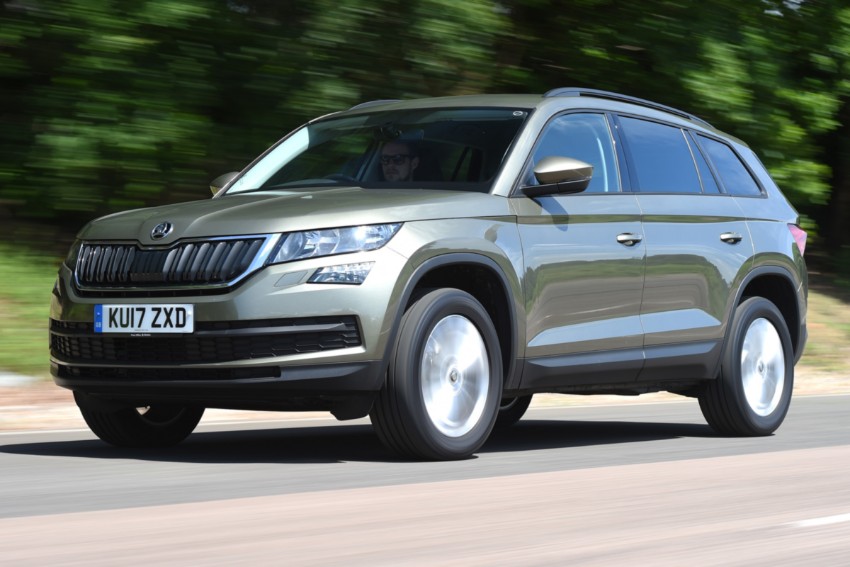 The Kodiaq is an interesting proposal that stands out for its seven seats and a very large boot. The offer of engines is complete, with powers ranging between 115 and 190 HP. The total traction is available according to engines.

The Skoda Kodiak is a 7-seater SUV whose cover letter is a huge interior space at a fairly competitive price.

Its interior is somewhat conservative in design, predominating black plastic. And more traditional forms against rivals who put on the table digital pictures of spacecraft. But it is precisely in its general solidity that lies its main attraction. 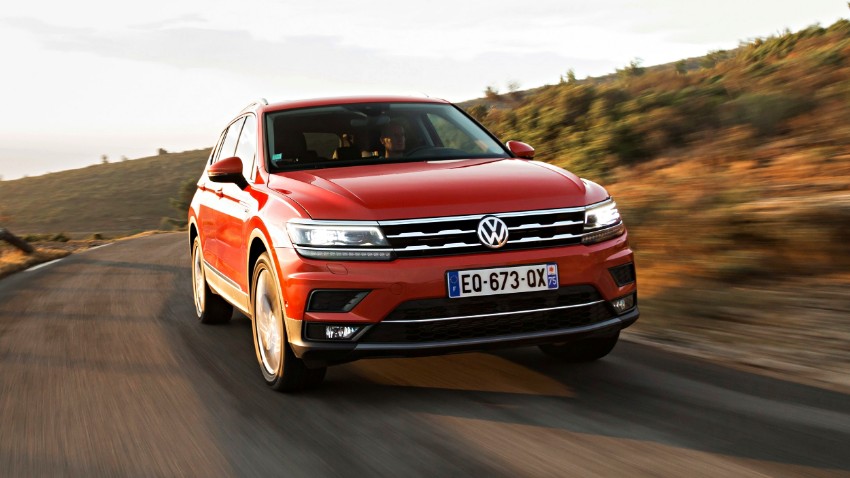 The Volkswagen Tigual Allspace is the 7-seater version of the well-known Volkswagen Tigual. It is a very similar model but it has an elongated body that allows it to accommodate two auxiliary seats in the boot and become a much more versatile car.

The Volkswagen Tiguan Allspace stands out for its excellent finish and interior quality, for its range of modern. And efficient engines and for its technological safety equipment, which includes the latest advances and driving assistants.

The main problem of the Tiguan is its price, clearly above the competition of the segment that comes from Korea. And Japan or even the group itself (SEAT, Skoda) with the same technology and that is difficult to justify coldly.